Click to read ‘Morning after Dark’, by David Lurie

“Morning After Dark” is a series of urban landscapes of the formal and informal parts of Cape Town, all of which have been photographed in early-morning light, and mostly when no-one was present.

This initial choice  – when the protagonists of the photographs are absent – was deliberate, and something of a departure for me; while recording what is seen, what is shown invokes what or who is not shown. They are, nonetheless, at the centre of this narrative: the true subjects of the photographs are, in this sense, invisible, yet contained within the photographs.
Only much later in the project, and purely by accident, did the opportunity present itself to include people as a prominent element in some of the images, which perhaps paradoxically reinforced and heightened the effect of my original strategy, while adding something eminently poignant to the adventure.

What began ostensibly as a documentary project, places I visited in my travels around the city, turned into a visual essay and meditation on time, place, memory and personal history; a mixture of journey and dream, bringing together – for me – the political, the philosophical and poetic.

This journey was an intensely personal experience, making observations about what I saw, a photographic diary of sorts, where non-linear and disparate images and symbols of startling modernity are linked to other stories and experiences of increasing chaos, dislocation and displacement in an ever-evolving, bewildering and dizzy co-existence.

The images form part of an ongoing book project about urbanization and the marginalized of Cape Town, provisionally entitled The Right to the City, to be published in 2015.

Susan Sontag concludes the opening argument in her benchmark collection of essays, ‘On Photography’ (1977) with the following observation:
Poignant longings for beauty, for an end to probing below the surface, for a redemption and celebration of the body of the world – all these elements of erotic feeling are affirmed in the pleasure we take in photographs. But other, less liberating feelings are expressed as well. It would not be wrong to speak of people having a compulsion to photograph, to turn experience itself into a way of seeing. Ultimately, having an experience becomes identical with taking a photograph of it, and participating in a public event comes more and more to be equivalent to looking at it in photographed form. Today everything exists to end in a photograph. (24)

As she puts it, ‘photography has become almost as widely practiced an amusement as sex and dancing – which means that, like every mass art form, photography is not practiced by most people as an art. It is mainly a social rite, a defense against anxiety, and a tool of power.’ (8)
These parameters, or touchstones, for the uses of photography speak as much to the contemporary proliferation of images as they did when Sontag first formulated them thirty five years ago, when the internet and personal mobile phone cameras didn’t yet exist. More than providing a set of uses for the medium, Sontag’s observation also places the chief historical argument about the true nature of the photograph in context – that is, the use of the photograph as both social document, whether prosaic and mundane or with journalistic rigour and intent, or as an artwork, usually in comparison with other forms of pictorial representation like painting. But perhaps these two polarities for understanding the popularity of the photograph are simply flags of convenience.
David Lurie’s subtly crepuscular images of Cape Town offer a third option. In his gentle, yet starkly realised views of peripheral and liminal landscapes, shot under cocooning and Turneresque skies, social document and aestheticism coexist in a different conception of the city. Often, alongside the readable structure of cities, the mappable territory which organises and arranges, lies the other structure of contingency – the structure of the city produced by its users, its inhabitants, whether privileged and with access to means and rights, or those eking out a different and more marginalised urban existence. Each city therefore has at least a double character, and a double narrative, and its inhabitants play many roles within them.

What Lurie’s photographs bring to life are the surfaces and depths of the city’s structure, its being – from the towering replications of its skyscrapers, to the hollow aortas of its undercover car parks, to the secret somatics of its circulatory systems of tar, wire, cable and pipe – even its proximity to and always imminent reincorporation into the natural landscape out of which it springs. All of these form a paradigmatic sign system, a primary cybernetic machine. Seen as such a sign system, the city – and In Lurie’s case, Cape Town – is the true locus of modern media – and aesthetic – philosophy.
Artists are, in de Certeau’s term, ‘tacticians’ of the city, finding their own routes, their own street plans, that have a multitude of meanings for them. This opening up of the city is ranged against the intentions of the urban planners and developers, whose purpose is to order and organise the city’s physical character, to impose restrictions on movements and behaviours. Lurie’s images reveal not only the contrast between the liminal spaces of the city and its more public and organised identity, he also points to the ways in which it is saturated with visual representation – from billboards and magazine covers to the endless graffiti which manifests as a signature urban aesthetic style – sprayed on the canvas which the city’s sometime decaying walls mutely provide, as a backdrop for the marginalised people whose space is thus visualised and realised.
This production of meaning in the undercurrents and secret spaces of the city continues to manifest in aesthetic forms. In the words of William Gibson’s famous cyberpunk dictum, ‘the street finds its own uses for things’.
Perhaps the key aesthetic manoeuvre of the city is the palimpsest, the writing or drawing over onto another set of images, texts or meanings. The city, we should remember, is a giant circulatory system. It recycles things, including water and air. And images and meanings are not exempt – new billboard images replace yesterday’s product, today’s headlines usurp yesterday’s. Aesthetic interventions participate in this palimpsestuous circulation of urban meaning – all a part of a unique urban geography. These palimpsests, in Lurie’s work, take on an elegiac quality, the momentarily deserted spaces in a liminal time of the day lending Cape Town a beautifully realised hauntology.
His vision is of a city both real and dramatically unequal in its social relations and its exclusions of both people and space. But Lurie’s Cape Town also exists only in the imagination. Ultimately, his images are the work of an aesthetic psychonaut travelling through imagined cityscapes.

James Sey is a social theorist and artist. He is currently Research Associate, Faculty of Fine Art, Design and Architecture, University of Johannesburg. 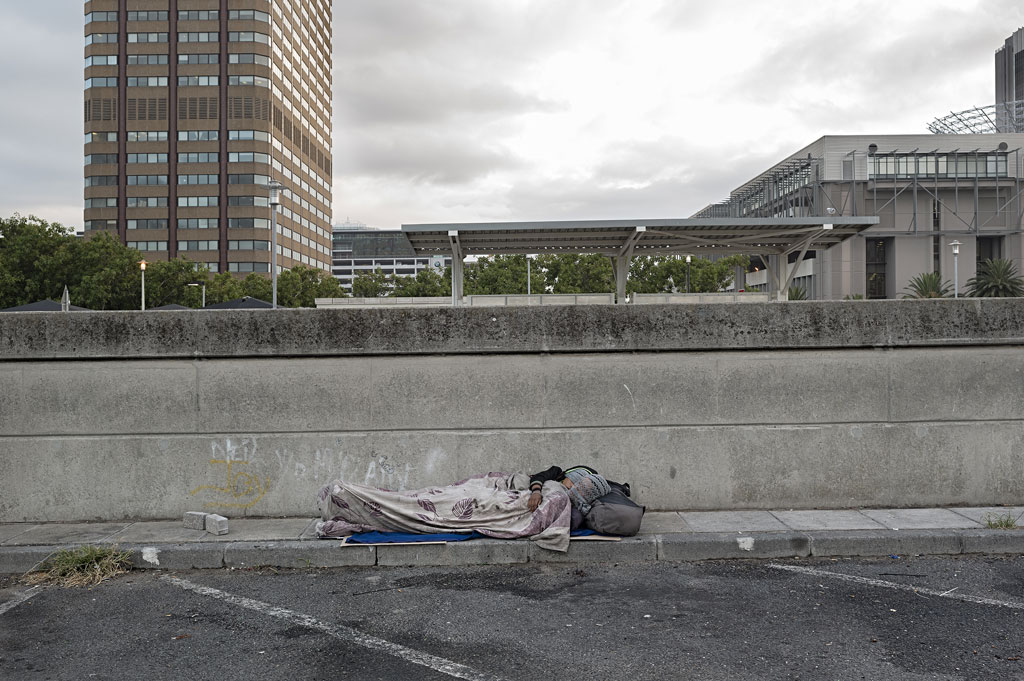